Iqra – A Blog of Things

Another day another hour another year gone by, left and right I see the marrow of my victims and the insides spilled bright. A crooked grin on faces made bright with the reflection of blood, the moon in my dreams isn’t made of silver but stinking cheese that smells of a slaughterhouse.

Drowning them has become a pastime, it’s easy how their neck snaps into angles unnatural for their fragile bodies, like rope they twist, like statues they look, beautiful in the sense that death is beauty. 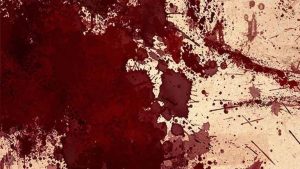 (The blonde one struggled, the red haired one was… feisty) And sometimes its nice; nice to destroy. To steal something not meant to be stolen by mortal individuals, to feel it slip through my fingers, life, its very essence in my hands.

Sometimes I don’t like the struggle sometimes I’m dangerous, dangerous and dangerous. Sometimes all I want is dead bodies and bloodied floors, broken limbs strewn everywhere and wow isn’t it beautiful? Just sets something right doesn’t it? Makes everything better; the destruction makes everything better. It makes the burning gone and it’s what happiness feels like.