Iqra – A Blog of Things 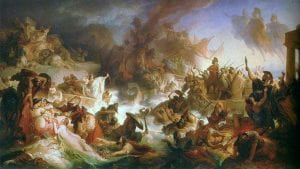 Marco was someone who looked back. Constantly. Like it was a compulsion that he couldn’t hold back. It was always at the same point, at the end of the same thing. The battle finished, the world ahead and the bodies of brothers behind.

The sorrow in his eyes, the glass and steel to his frame. Marco looked upon the broken battle field and searched. Some would say he looked for meaning in the slaughter, or for a brother to rise and struggle back to the arms of his comrades, covered in blood or not. Perhaps he looked back and thought of his future. Of how his past continued to repeat, of how his brothers continued to die around him, like the season always coming and going.

There was so much to do now, but Marco always thought with everything ahead and the world so terribly unkind, he felt like a blind man. Feeling his way around and hoping not to run into the hell of darkness where his brothers awaited. He knew he would figure it out, everyone kept saying so. He knew things would fall into place; everyone kept saying so.

The light he hoped to turn to at the end, the light of the blind faith he had, in the ideals pushing onto him since birth. The light he hoped would be there. His brothers by his side to fight for it, because nothing in this life that was worth it would come easily; he knew he had a future still before him.

He knew, looking back he knew, with a hope he knew he didn’t have anymore, that he could die tomorrow. He could be the one to never come back from torn battle fields, he could be the one laying beside his brothers, never to march again. His ghosts gone, his memory failed. He was being haunted, but that had nothing to do with the presence of the dead and everything to do with the memory of the living.

Marco closed his eyes. Looking back at the broken bodies of brothers never lifted the weights dragging down his breathing, or helped the cold he felt in his soul, never warmed by any fire. He wondered if there would be time to find happiness. He wondered if he would ever forget the battle fields etched into his memory or the bodies beneath the rubble.

Marco marched forward and wondered if he would ever be able to be blinded by the light again, when he felt lost, running around in shadows.

This child, on seas longer and harder than any man should weather, knows pain. Knows loss, knows the burning of cities, the sound flesh makes as it meets a sword, the cries of the dying. This child, some would say, is tragedy. All wrapped up in survival and terrible loss.

He sits, quite as midnight, on the end of the bunk, eyes staring, eyes broken, eyes like ice and steel.

“Why are you on my ship?” Is the first thing I asked him, and the boy shrugged his bony shoulders. “That’s not quite an answer.” I told him in response, but truly I didn’t expect him to speak. He reminded me too much of frightened animals to expect anything but a bite from any reaching hand. The boy had sharp teeth and sharper claws, hiding around there somewhere, his survival depended on it.

“You know, the fall of Troy was a long time ago, it’s been many years, but one never forgets such tragedies. The honor that was stolen from men who decided to do depravities far beyond anything they ever should have done.” If Marco looked back at the boy, he would see the twist of his face, the tightening of bone and muscle.

“I wasn’t there, I wasn’t anywhere, really. Everyone is lost at some point, I think. Not everyone finds themselves. Here out on the seas, it’s everyone and everything that surrounds you that counts. You’re in a place where the world is bigger than you are and every day you can feel it. If you died this day, your body would be left to turn to sand, to dust under the sea and there would be nothing.” A tightening around the corner of Marco’s eyes, that was all the story the boy needed to see.

“In this world, there is steel and there is strength and there is everything in between. You can die fighting to get to shore before you drown, or you can die fighting with fire; with your brothers by your side. There are so many ways the dark can take you and the light can blind you, but there will always be the in between. Where you can find yourself, where you can make a home with the lovers and those that lost and those that can give you everything.”

The boy watched as Marco looked at the porthole and never turned to him. The boy stilled as Marco talked. The ugly turn of emotion, the twisting, withering mass of dark things in him. The bitterness, the hatred, the lack of light and the blinding clarity that the world is a messy, terrible place. All of that out in the open, all of that and more.

The boy watched, and the boy learned, and the boy saw that Marco was something else. Someone else that could be like him. That had been like him. Regret, anger, fear, loss, uncertainty. Everything Marco was showing to him and something more. Something that looked like redemption from the loneliness. Something that looked like hope, fluttering in a dark cage.

He didn’t know why he was on this ship, why he was sitting on this bunk, why he was staring at this man, but he knew that there was something he had to acknowledge now between them. Something that Marco had put out there in the open. Something that could kill him and save him. He knew that this decision, this moment, could last forever in his memory and could never be forgotten, not by him, not now.

“My name is Theseus.”